The History Of Fitness Marketing: How It Killed The Joy In Exercise For Women

Fitness for women looks like skinny and toned bodies in revealing outfits. This marketing image has prevented women from simply exercising for joy and other intrinsic benefits, but how did we get here?

We are at the end of decades of advertising that defines fitness as a chore and a punishment for weight loss and to achieve the “perfect body.”

To understand how fitness for women is defined, we have to go back in history.

A reason to sweat

Fitness, as we know it today, didn’t begin in America until the 1950s, when the workforce started to do more sitting than lifting.

At this time, fitness was an activity for men. It was inappropriate for women to exercise or even to sweat, for that matter. It was common to believe that exercise would make a woman infertile.

Some women were defying the cultural beliefs and Bonnie Prudden was one. She was an avid skier and mountaineer, so she was comfortable with fitness and sweat.

Her impact in the fitness world began with children after she realized her kids weren’t doing any rigorous movement in their school’s PE class. She developed an afterschool fitness program for kids and was instrumental in molding the Presidential Fitness Test.

In the 60s, Prudden became a columnist in Sports Illustrated to introduce movements and exercises from her book, “How to Keep Slender and Fit After Thirty.” Recommendations from her book included “sexercises” and “complete diets and minutes-a-day exercises for slimming down and building up.”

The inclusion of this type of language was very intentional. Prudden knew that, at that time, women weren’t going to exercise just because it helped them feel strong. She had to encourage them by giving them the external reward to get more attention from their husbands.

At the same time, Lotte Berk, raised in Germany, had brought her unique workout style to New York – a precursor to the Barre method. She had a women’s-only studio and taught classes with movements like “the peeing dog” and “the prostitute.”

Both women realized that fitness was not just for slimming down but also included many intrinsic benefits like more energy, strength, and confidence. But as the two grew their respective businesses, their marketing messages would shape the idea of fitness for women for years to come.

If it wasn’t proper or acceptable for women to exercise, how could you convince women (or their male counterparts) to come to a class or buy a program?

Marketing for women’s fitness began as a way to get people to believe that women COULD exercise. Early advertisements showed fitness as a way for women to shape and tone their bodies and increase their ability to perform better sexually.

Bonnie Prudden sold parents of girls afterschool fitness classes by assuring them that these movements would improve their curves. “Under every curve is a muscle, no muscle, no curve, no curve, no husband.” she would say.

The idea of curves was our ticket to be able to participate in fitness. At that time, this was a huge success for women.

Prudden and Berk knew that exercise was a way to help women feel better, but they couldn’t show women these benefits with empty classrooms. These marketing messages were necessary to shift the mindset of the entire community and culture.

In the 1960s, Judi Sheppard Missett had begun a new movement for women’s fitness — Jazzercize. These instructor-led classes were a way to combine dance and exercise. It was an ideal fit because dance had always been acceptable for women.

As Natalia Mehlman Petrzela quotes in her article “The Fitness Craze that Changed the Way Women Exercise” in The Atlantic,

“As one woman told me of seeing Jazzercise on television as a child in the 1980s, “It was the first time I realized I was supposed to work on my body … to look how I don’t naturally.”

With the increase of boutique studios and instructor-led classes, so was the rise in fitness fashion — and the invention of the leotard and sports bra. The fitness fashion of the 70s clearly defines a woman’s shape, and advertising reflects images of thin (white) women wearing make-up and tight one-piece suites.

In the 80s and 90s, the look of fitness for women was thin and dolled up. Marketing leans heavily into headlines to trim your waist, lose belly fat, and guides to help get the perfect body.

In 1985, the National Institutes of Health began using the Body Mass Index (BMI) chart to define obesity. If you grew up in the 80s and 90s, you probably have been told where you fall on this chart. Although it’s [wildly inaccurate], the BMI chart has defined fitness and health as a number and a specific body size for all humans.

After 30 years, fitness advertising continues to use external validation and pressure to conform to encourage women to exercise. Fitness for women was losing weight, getting the perfect body, and hopefully, doing it with the least effort and time.

Forget the idea that fitness should be something you enjoy – fitness was a punishment for eating too much or having different genetics.

Marketing latches onto the wave of “skinny is healthy,” and advertising reveals less clothing, thin women, and body-specific messaging.

Advertising for exercise programs and gyms wasn’t the only thing that defined women’s fitness. In 2004, the entertainment industry started profiting off of public shaming with the introduction of the show, The Biggest Loser.

This show drives home the before and after comparison by making contestants stand nearly naked on a large scale for everyone to gawk at publically. The viewers watching a seemingly “success” story has only one conclusion to make…” she looked terrible when she was fat, and now looks great because she’s skinny.”

The 80s and 90s had the perfect platform to guilt and shame women into the gym. The “war on obesity” gave marketing a government-approved message to prescribe fitness to anyone with a body that was not thin.

Around the 2000-the 2010s, the fitness industry explodes with new methods, boutiques, and class-based workouts. Companies like, Soulcycle and Orange Theory create workout spaces that lower the lights and turn up the music, which feels reminiscent of a late-night dance club.

Advertising leans even more into sexualizing women’s bodies and burning calories as a motivator for those new to fitness.

This decade is about the same time (the 2010s) that Crossfit begins to make some noise on the west coast. With the introduction of HIIT workouts, PRs, and WODs, women are celebrated for building muscle and being strong.

The average woman is still not represented in marketing because we continue to see less clothing with the addition of more strength. I would argue that the extra skin showing is what allows the extra muscle to land well on a male audience and make it more “acceptable.”

In 2016, I started my first kickboxing program. A marketing group recommended that I use images that would “sell the dream,” meaning women didn’t want to see photos that looked like them but pictures that looked like skinny (and sexy) women. Here is the exact image they recommended:

You can see this type of representation of women in fitness still today. Many fitness businesses are still “selling the dream.”

The business of betting on your failure

Gyms begin to use a method of a “free” challenge or program to lose weight. Online advertising targets women with an invitation (“seeking 20 women”) to sign up. During the first meeting of this “free program,” participants are asked to pay upwards of $500 for recipe books and materials with the promise that they will get their money back if they lose the weight.

Another way to look at this is that these companies are betting on your failure. It’s their business model. If everyone succeeded, they wouldn’t make money (which is required to run a business).

Bootcamps and challenges use before and after photos, measurements, and fancy technology such as InBody scans to show quantifiable results to prove their success. Unfortunately, most women gain the weight back after these challenges and can develop a negative relationship with fitness.

In recent years, the fitness industry has started to get more influence by the growth of social media. At first, you can see the change from using the word “weight loss” or “fat” to things like “wellness” and “burn.” They are selling the same result, but advertising starts to understand that not all women want to see body-shaming messages.

Unfortunately, gyms at this time are just trying to change marketing tactics instead of looking to change the methods they use to help women on their fitness journey. Once women are lured into a program or a class, they will still find scales, body weight measurements, and other physical appearance conversations.

If you look to a small corner of the world, you will finally see women participating in fitness with a focus on its intrinsic benefits.

Influencers such as Tally Rye and The Running Fat Chef are changing the dialogue to educate women on intuitive movement and health at every size.

Women can find online fitness communities such as Joyn and Feel Strong Movement that highlights a new definition of women’s fitness. Fitness is for everybody, and a woman’s physical appearance has nothing to do with exercise.

If you look hard enough, there is a space that is finally recovering from the wave of the BMI charts and the “war on obesity.” You’ll find some gyms and trainers that are moving towards recognizing that health does not come in a specific size and that movement should be joyful.

We can finally see a representation in marketing showing the intrinsic benefits as motivators to join a gym through inclusive language and imagery.

Unfortunately, we can still see many more businesses continuing to perpetuate the fusion of weight loss and fitness – even in women’s-only gyms.

Fitness needs a new definition for women. This shift will be difficult without the conscious decision for gyms and trainers to change their marketing and, more importantly, their programming and definitions of success.

Many fitness businesses have built a significant source of revenue from nutrition programs and services like InBody Scans.

However, effective marketing doesn’t have to be at the cost of ethics. We have been unethically shaming and guilting women into the gym with marketing messages that the body you are in is not good enough.

What do we need to ditch?

What should we see instead?

Just like health is not a size, fitness is not a shape or size. The history of fitness marketing has created trauma, unrealistic expectations, and hatred of fitness for women. It’s exciting to see a small corner of gyms and trainers changing the definition of fitness for women, but until we change our marketing and programming on a larger scale, women will still walk in the door thinking they are there to work out to lose weight. 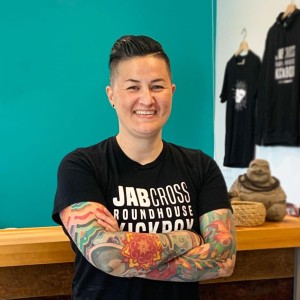 Stacy Kim, the founder of KUMA Fit (a women’s kickboxing & fitness studio in Saco, Maine) and Stacy Kim Coaching, has dedicated her life to teaching. She has taught over 10,000 classes and has trained in martial arts and fitness for over 15 years. Today, her mission is to redefine what fitness means for women, to stop objectifying the body, and focus on moving to feel strong.

No spam, notifications only about new products, updates.

Get Updates And Stay Connected -Subscribe To Our Newsletter

Learn how to inspire and lead women through a positive-based approach to coaching, authentic messaging, and mission-driven marketing.
Facebook-f Instagram Vimeo-v Podcast